love at the first sight
-wedding of the fiona and kevin 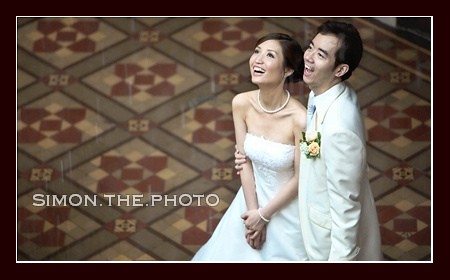 The story began on a Christmas night … Kevin went to the Christmas ball at the University of Hong Kong (HKU), the second he found fiona, he already knew she ‘s the one of his life. The love inside pushed him to make a "first move" — inviting a girl to dance … ….

Did the love story start like this? … … probably not. Fiona didn’t give him a chance, walked away and left the poor Kevin in the dark.

After that night, Kevin couldn’t forget Fiona ‘s face, he got help from his friends in HKU to find the contact of Fiona. And finally, he managed to get Fiona ‘s ICQ no. To his surprise, she was studying Electronic Engineering degree (he graduated from the same department as well), so he kept contacting her and offered to teach her some of the courses.

We started shooting at Fiona ‘s home in Tseung Kwan O in the morning, followed by location shooting at HKU, then back to Tseung Kwan O. Even though it took long time traveling and it rained so bad on Sunday, they really loved to take some photos at HKU.
Happy looking at the rain drops another location at HKU the hall behind is where they first met … … Included the raindrops in this pic to tell you the weather of the day.
Thanks Vickie holding the umbrella for me a lovely pairs of wedding shoes after the location shooting, we returned to Tseung Kwan O and prepared for the games and tea ceremony it ‘s for the games the socks are from all the groomsmen …. … you can imagine the smell on a rainy day ceremony at the Langham Hotel — Fiona and her father fiona and her best friends !! awesome!!!! Kevin didn’t know playing piano at all, but he learned one song before wedding and played it for Fiona A big surprise to Fiona